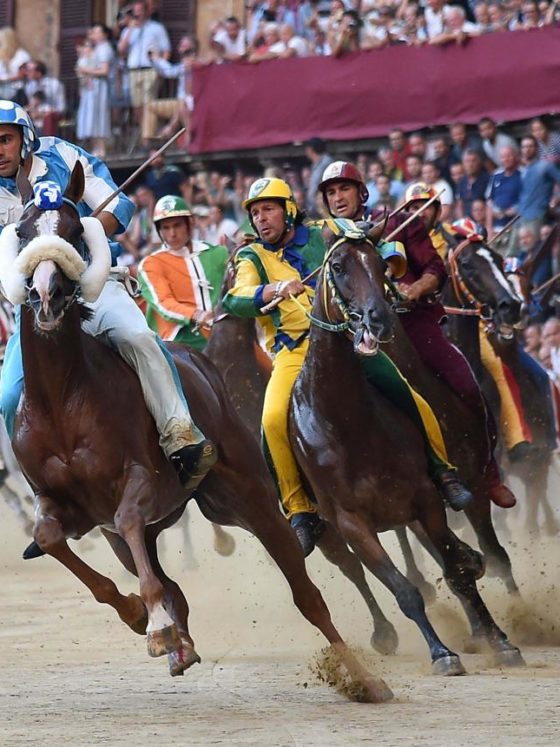 PALIO DI SIENA
The Palio di Siena is a competition between the city wards of Siena in the form of a horse race of mediaeval origin. The “carriera”, as the race is traditionally known, usually takes place twice a year: on 2 July the Palio is run in honour of Madonna of Provenzano, the feast of the Visitation in its extraordinary form, and on 16 August in honour of the Assumption of Mary. 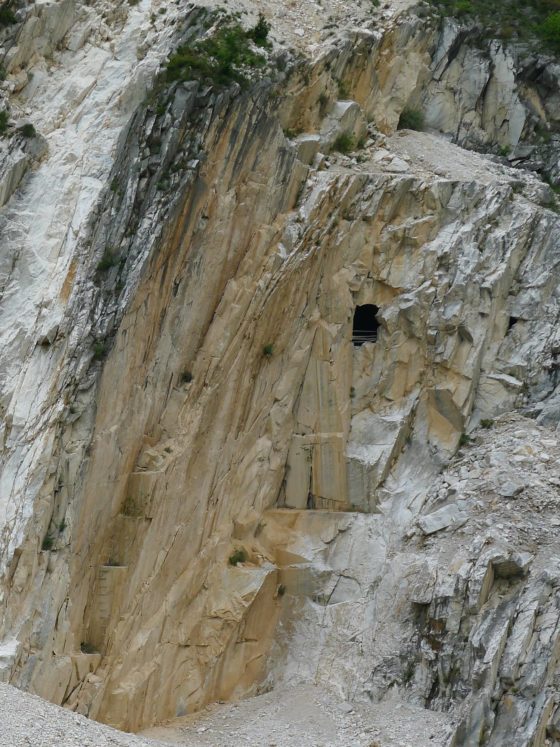 VISIT TO THE CARRARA QUARRIES

VISIT TO THE CARRARA QUARRIES
The visit to the three marble basins of the Torano, Fantiscritti and Colonnata marble quarries is a unique and unforgettable experience. Visitors enjoy a spectacular journey along the route of the former Marble Railway, passing over the bridges of Vara and through the evocative tunnels dug into the rock, in the discovery of the quarries, from which Carrara white marble has been extracted since as long ago as pre-Romanesque times. 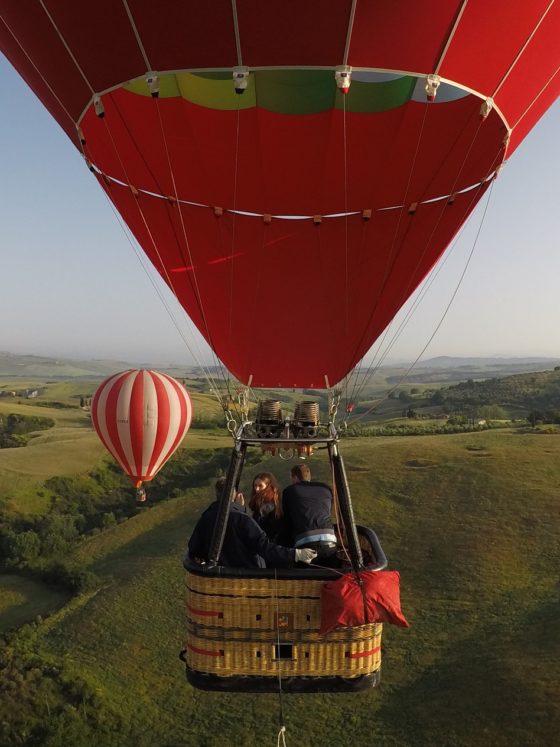 HOT AIR BALLOON FLIGHTS
The starting point for our hot air balloon flights is Tavarnelle Val di Pesa at the heart of the Florentine Chianti. Thanks to the strategic position of our launch site, during the flight you can admire old castles, Renaissance villas, ancient towns and villages such as Siena and San Gimignano and the unique landscape of Chianti, dotted with hills, vineyards and olive groves. Once the flight is over, you will enjoy an excellent and rich breakfast made from typical Tuscan products. 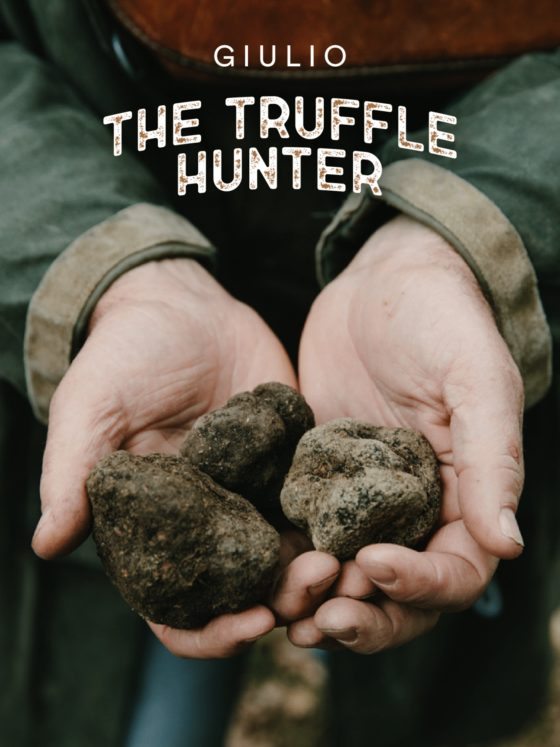 Giulio the truffle hunter
The truffle hunt offered by Giulio was designed for those who love the first fruits of the season and quality food, ensuring that they get closer to the wonderful world of Tuscan truffles and learn all of their secrets. At the end of a lovely walk in the woods accompanied by Giulio and his inseparable Lagotto Romagnolo dog, your day will continue with a delicious truffle-based lunch accompanied by a good local wine. 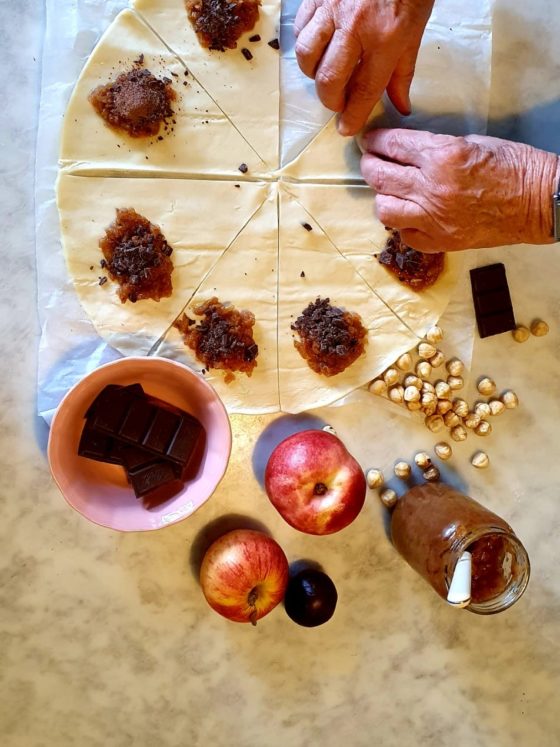 COOKERY COURSES
Our cookery courses are held in various locations in Tuscany, including Florence, Chianti, Siena and the beautiful Val D’Orcia. During the lessons, you will learn all the secrets for preparing a delicious Tuscan menu, using only local seasonal products. At the end of the course, you will enjoy the fruits of your labour accompanied by excellent local wines. 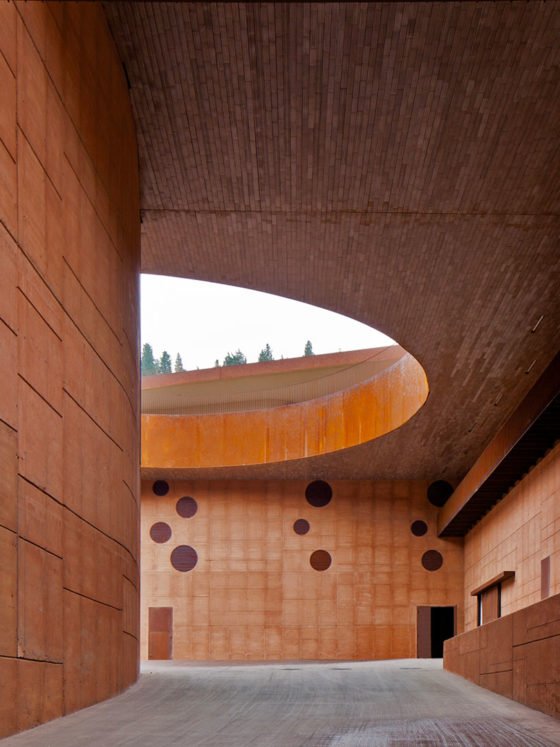 From the perspective of wines, Tuscany is one of the most famous regions for the production of high quality labels. Below is a list of our favourite wineries. 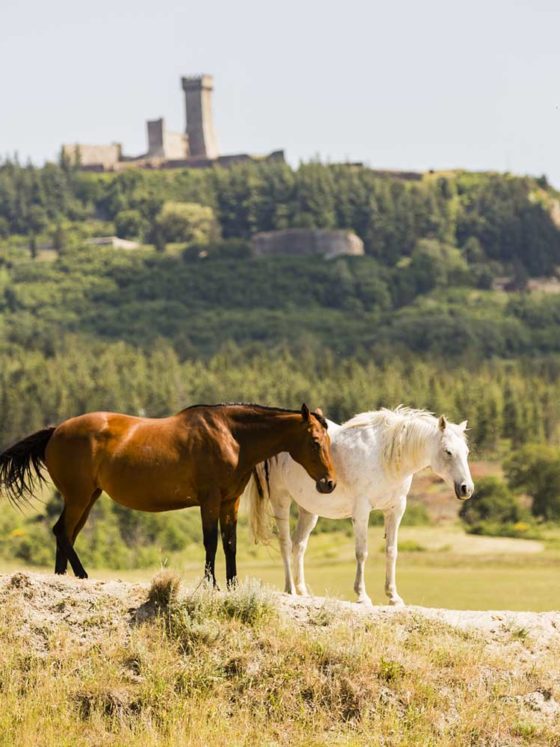 Immersed in the Bagno a Ripoli countryside, on the Noccioli ravine, from which it takes its name, the horse riding centre was opened in 1986, inspired by the skill and passion of Marcia Vahlberg and Carmelo Strazzulla, both federal instructors boasting vast experience. Their professionalism, combined with the use of very reliable animals, allows you to enjoy wonderful horse rides in complete safety surrounded by typical Tuscan scenery. 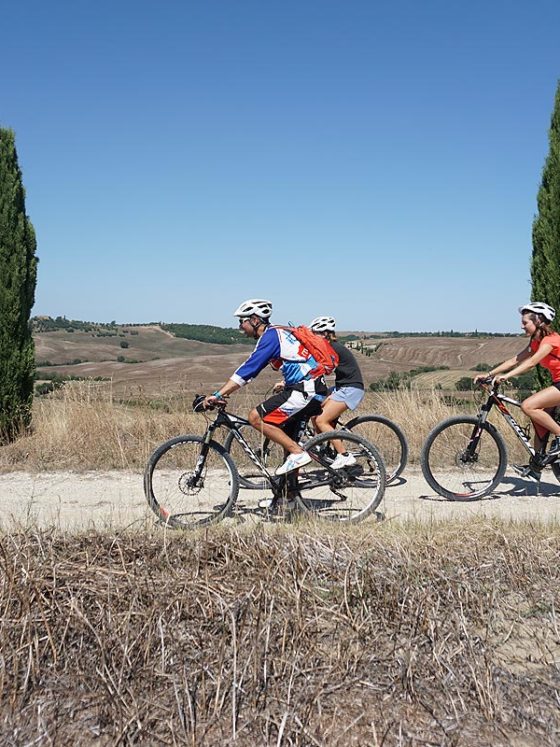 GUIDED E-BIKE TOURS
Guided e-bike tours are undoubtedly a new and convenient way of discovering the best of Tuscany, pedalling with minimal effort thanks to the technical support. During the excursions, which are suitable for both adults and children, you will enjoy the fabulous Tuscan landscape, discovering enchanting villages, historical residences, castles, tasting wine, and other local specialities. An experience to be enjoyed together with family and friends. 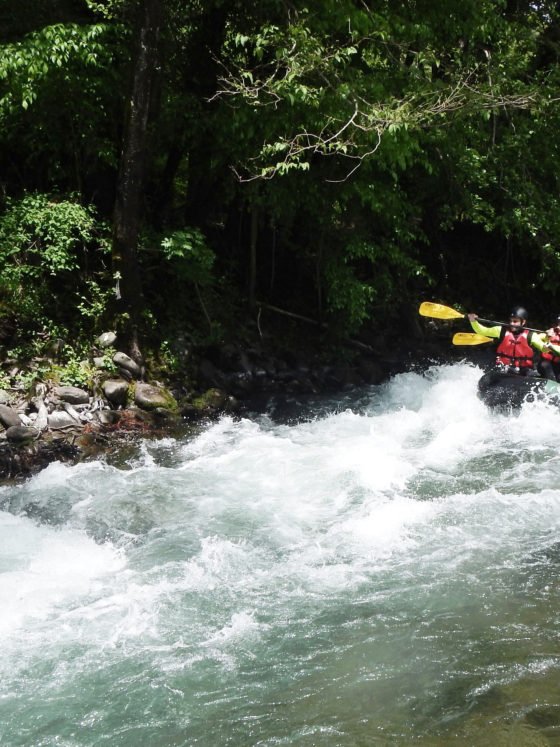 RAFTING IN GARFAGNANA
The Garfagnana Rafting Centre organises rafting trips along the Lima River at the heart of Garfagnana. A perfect way to get closer to the river and discover a world that we often have at our fingertips but are unable to explore. For those seeking fun and adrenaline or simply wanting to relax in an unexplored location. 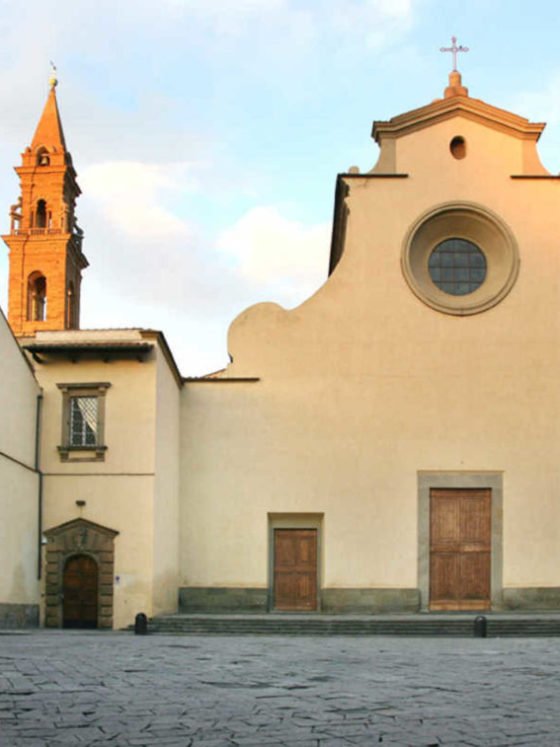 OLTRARNO QUARTER, FLORENCE
If you want to discover the authentic and genuine character of Florence, we suggest you visit the Oltrarno district, famous among the Florentines and less touristy than the historic centre. Enjoy a walk through the San Frediano and Santo Spirito districts, stroll around the market stalls, discover the artisan workshops, gardens and churches, and dine in one of the local restaurants with homely atmosphere. 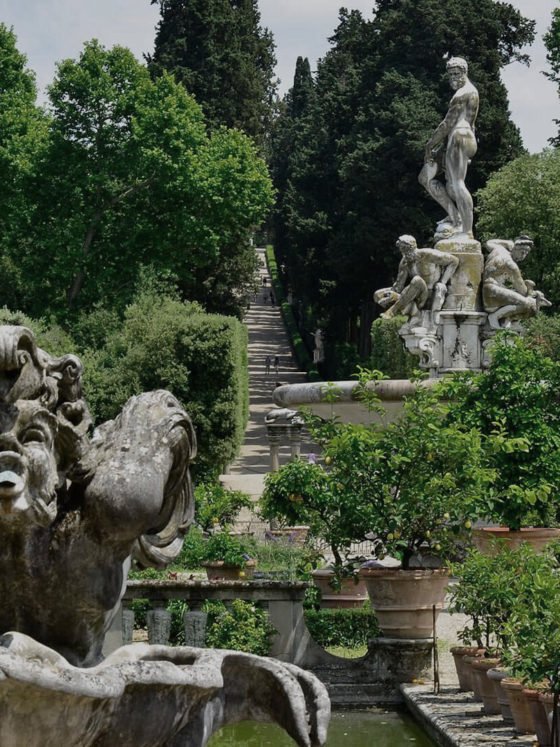 BOBOLI GARDENS
The Medici were the first to tend to the gardens, creating the Italian garden model that became an example for many European courts. The vast garden area, with a regular pattern, constitutes a true open-air museum, populated by ancient and Renaissance statues, adorned with caves, primarily the very famous one created by Bernardo Buontalenti. In addition, there are large fountains, such as Neptune and the Ocean. A visit to Boboli completes the trip to the Pitti Palace, of which it forms an integral part, and fully conveys the spirit of court life, at the same time allowing you to enjoy a garden that is constantly renewed while maintaining respect for tradition. 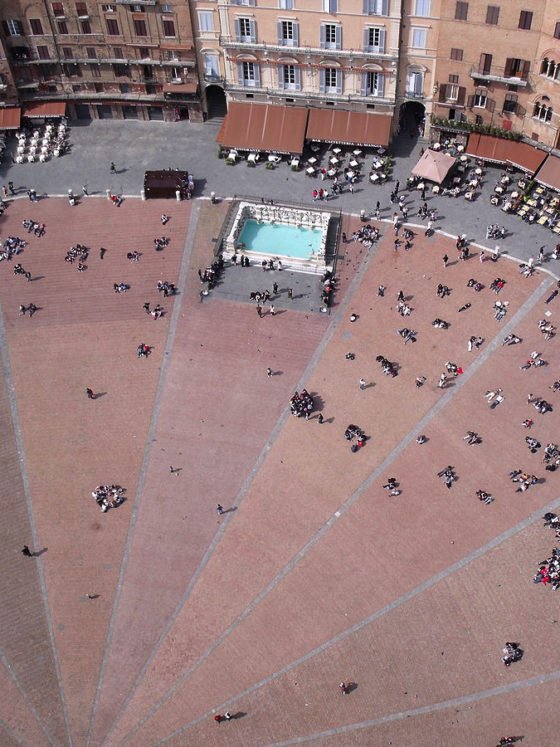 SIENA PIAZZA DEL CAMPO
Piazza del Campo is one of the world’s most beautiful squares and is the beating heart of Siena and its people. It is so called as it was once a green space which hosted markets and fairs. It has a shell-like shape split into 9 sectors in memory of the 9 Lords who governed the city from 1287 to 1355. The brick paving is arranged in a fishbone pattern and dates back to 1347; it covers an irregular shape sloping downwards. The external part of the Square is made from pietra serena sandstone and during the Palio it is covered in tufo stone. The Palazzos that surround the Square were built following a rule – among the first urban planning provisions – established since 1297, which imposed respect of precise aesthetic criteria, prohibiting balconies. 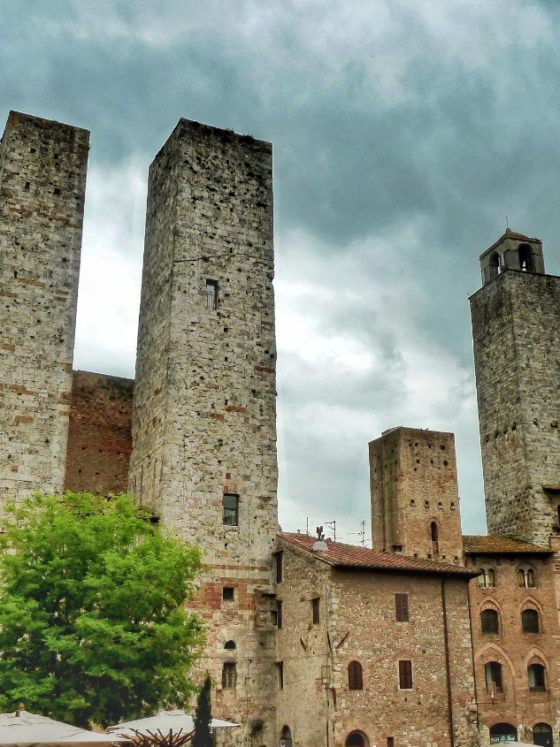 SAN GIMIGNANO
A small fortified city halfway between Florence and Siena, it is famous for its architecture and for its beautiful mediaeval towers that make the city profile truly unique. In its most prosperous period, the rich families of San Gimignano came to build 72 towers as a symbol of their well-being and power. Of these, 14 still remain today, contributing to making the city atmosphere even more fascinating. Declared a UNESCO World Heritage Site in 1990, San Gimignano also offers excellent local products, such as saffron and the white wine known as Vernaccia di San Gimignano.

VAL D’ORCIA – PIENZA
The city of Pienza, strongly desired by Pope Pius II and situated at the heart of the Val D’Orcia, is considered the incarnation of the Renaissance utopia of the ideal city. Having obtained recognition as a UNESCO site in 1996, it still communicates to the world the urban canons of the Renaissance due to the rational organisation of its spaces and the perspectives of the squares and sixteenth-century buildings.
The geometric perspectives, the impressive volumes of the Cathedral and the Piccolomini palace, and the careful filling of the spaces of the old mediaeval village centre are remarkable evidence of the architectural genius of ancient times. 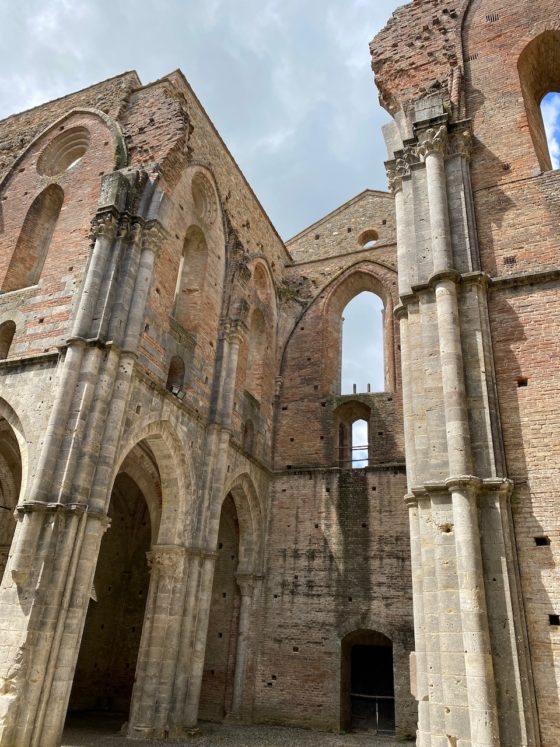 SAN GALGANO ABBEY
San Galgano abbey is a Cistercian abbey, located about thirty kilometres from Siena, in the municipality of Chiusdino. The abbey is open every day of the year. The entry ticket also provides admittance to the new Museum in Chiusdino, the birthplace of San Galgano. Both due to its fascinating history linked to San Galgano and for its position among the greenery and nature, this Cathedral open to the sky and to the world has unique charm. I recommend visiting the Chiusdino Museum and the village before entering the Montesiepi Chapel with the sword in the stone and descending to the abbey. 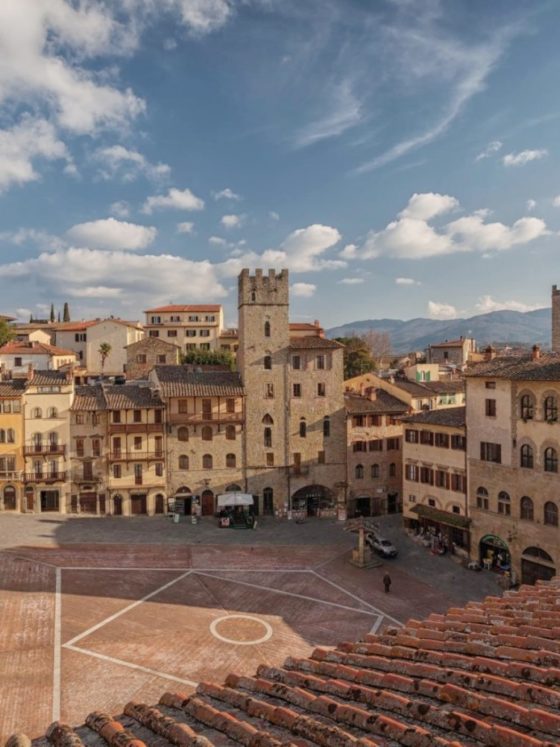 AREZZO
Arezzo is one of Tuscany’s most beautiful cities. Its origins date back to the Etruscan and Roman era of which numerous testimonies have been found, including the Roman amphitheatre. The historic centre still retains its mediaeval charm. Arezzo is rich in works of art such as frescoes, paintings, sculptures and stained glass windows kept in the city’s numerous museums and churches. Piazza Grande is one of Italy’s most beautiful squares and hosts numerous events throughout the year. The Basilica of San Francesco preserves the masterpiece by Piero della Francesca, a sequence of frescoes entitled History of the True Cross. The Church of San Domenico, on the other hand, has the famous Crucifix by Cimabue, and the Cathedral is considered by many to be one of the most beautiful examples of Gothic architecture in Italy. 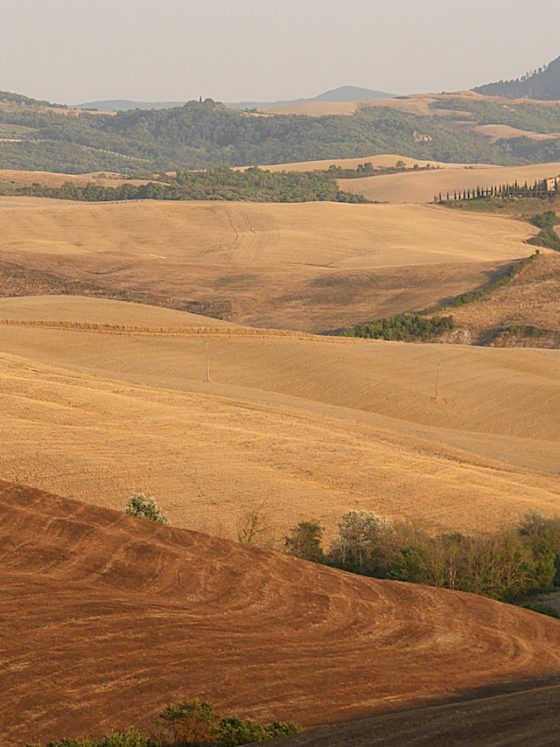 VOLTERRA
The city of Volterra, famous for the mining and processing of alabaster, was one of the main city-states of ancient Tuscany (Etruria); in the Middle Ages, it was the seat of an important Episcopal lordship. Today, it conserves an important historical centre of Etruscan origin. There are many remains from that period: Porta all’Arco, magnificently preserved; Porta Diana, preserving the blocks of the jambs; a large part of the city walls, built with cyclopean blocks of local stone; Roman ruins, including the hemicycle Theatre; and mediaeval buildings such as the Cathedral, the Medici Fortress and the Palazzo dei Priori on the homonymous square, the nerve centre of the town. 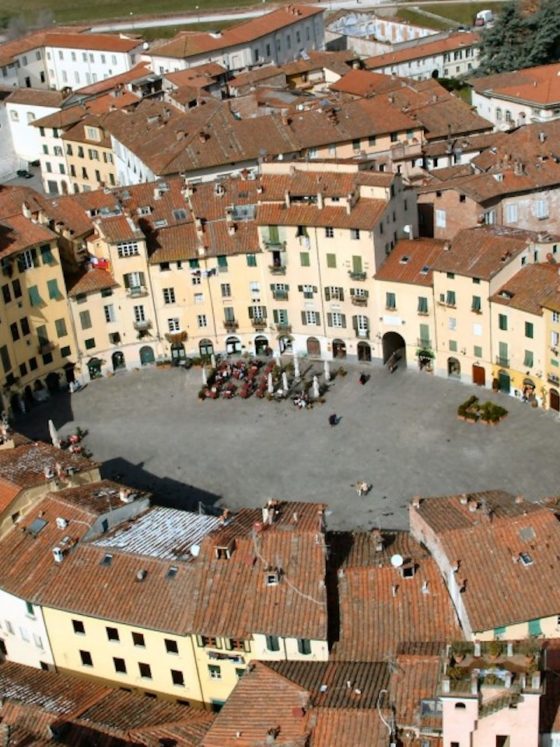 LUCCA
Surrounded by greenery and rich in monuments, Lucca is one of the most beautiful Tuscan cities. Set within sixteenth-century walls, its historical centre is a prodigy of architecture and urban planning. Many countless beauties capture the eye, from churches filled with works of art to squares teeming with life, to the enchanting parks and majestic towers that overlook the ancient village. In short, Lucca is a city to be explored, a treasure trove of wonders to be discovered with an open heart and a keen eye for spotting every detail.

Login to Poggio Baronti
Reset Password
Enter the username or e-mail you used in your profile. A password reset link will be sent to you by email.